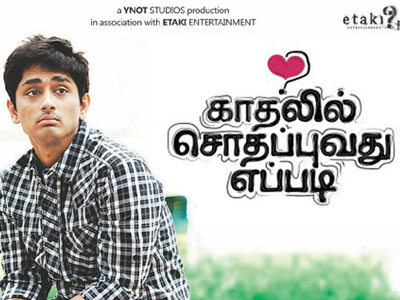 By a strange twist of circumstances, I watched a Tamil film twice – in a week!

It may seem incongruous for a group of 40-somethings to queue up for a movie about teen romance… but just as lopsided as a dad going to the same picture with his pre-teen daughter! Yet both experiences were enjoyable, and provided a nice perspective, in contrast to each other.

Looking back, it seems to me that the theme of ‘love in college’ might appeal most to those who can see it as irreverent, casual and even funny – as only those long past their University days can, or those yet to enter it.

While with the first group, I felt a brief flashback to a halcyon period in every adult’s life – the carefree days of teen-age. To a time when we all lived and learned for ourselves, in a random, rambling, often bungled-up way, many of the same things we’d have learned so much more efficiently (and effectively)… if only we’d been capable of listening to our elders and studying their example.

The second time around, I vicariously experienced the thrill of how a future filled with amorous interludes and dreamy dates might be, with its promise of fairy tale love stories and maudlin escapades… and watched in semi-amazement at how incredibly similar the areas that sounded humorous and ‘over the top’ to us ‘oldies’ were to the ‘youngster’ as well.

(I’ll bet my boots that a teen audience, caught up in the angst of unrequited love, would have glared or cursed at our laughing at such “serious matters” – and that’s as it should be.)

The film displays undergrads in a series of different relationships – hopelessly seeing a partner, or flitting through a series of them; finding love only to lose it, or to later get it back; broken engagements, and broken hearts. And it does it all in a flippant yet sensitive way, instead of striving hard to stuff heavy philosophy down the throat of an audience. That’s perhaps why I enjoyed “Kadhalil Sodhapuvadu Yeppadi” so much.

A week later, I may be hard-pressed to recall any dialog or scene from the film. But I suspect the message that will linger around in the recesses of my memory for a long time will be the important one.

That relationships are messy. We all muddle our way through them. The key is to keep the ones that matter most to us – by accepting those special people in our lives, exactly the way they are… rather than how we would have them be.

That’s how the illusion of “made for each other” relationships can get concretized into a less transient reality.

KSY delivers this wisdom in a light-hearted, enjoyable package. Well worth a watch – or, dare I say, even two?!

Read Dr.Mani's Latest Book
'Knife At A Gunfight' is 5 little books - in ONE! Learn how to focus, beat procrastination, get more done, blitz through your to-do list and gain good habits that boost your productivity. Build a NEW life, in 5 easy steps! Learn more: CLICK HERE
You may also like
Pick Your Battles

Am I Your Friend, I Ask…
SEARCH