I’m reading a collection of short stories by Agatha Christie. Many were published in the 1920’s. Suddenly, it struck me –

Her writing is still relevant ONE HUNDRED YEARS later.

Contrast this with most contemporary writing (e.g. blogs, news reports, even ebooks) with shelf life measured in minutes, hours, or (rarely!) days.

What can YOU do today – that will still matter 100 years down the road?

Think about it over the weekend. I will, too. 🙂

Are You Rich? Or Poor?

I was wondering today about what makes one rich or poor.

An Urge To Do SOMETHING

The chill of dawn was in the air. A gentle breeze ruffled the lush green grass. But it was already bright. Days begin earlier in the east.

I sat on the steps leading to our room at the Forest Inn resort. Butterflies flitted from one flower to another, busy in their search for nectar. The woods were alive with birdsong. The rising sun smiled shyly through hazy clouds, making a lovely sight framed by tall trees. 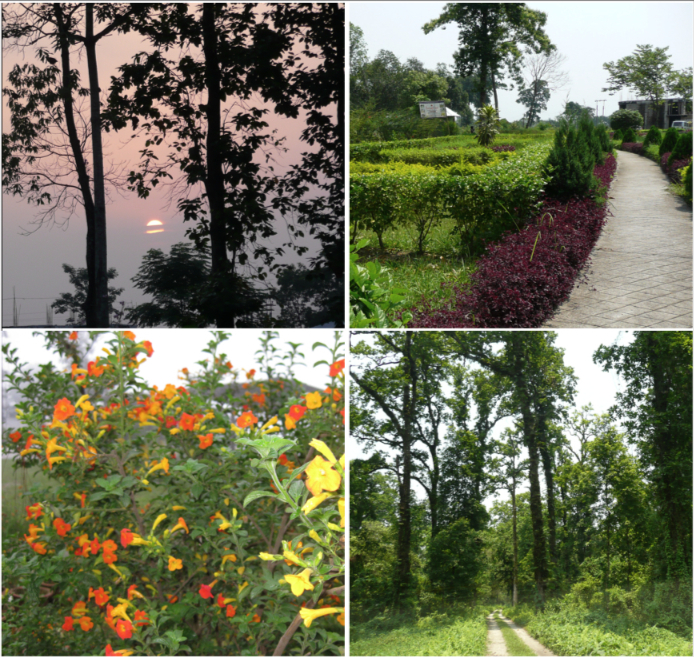 As I lazily glanced around all this wonder of nature, my mind stirred restlessly.

“What should I DO next?”

Considering that this was an unscheduled stop, made necessary by a series of strikes and shut-downs brought about by political uncertainty in Darjeeling district, we had little knowledge about the local sightseeing spots or activities.

And in the middle of a forest, even cable TV reception was spotty and broke down often. No internet (gasp!). Therefore, little to guide us.

“Nothing” I told myself. “Do nothing!”

But it felt strangely uncomfortable. I (like you?) am so attuned to doing things. Something. ANYTHING.

It took almost a day to wind down from that perpetual urge to be in constant motion. To shift down those mental gears, slow down, and immerse myself in the natural delights all around.

Fighting the urge to do something is probably the hardest thing for any entrepreneur, over-achiever, ambitious person to do.

It’s also the most important one to learn – because when you master it, you begin to live… and enjoy life!

The Journey Is The Destination 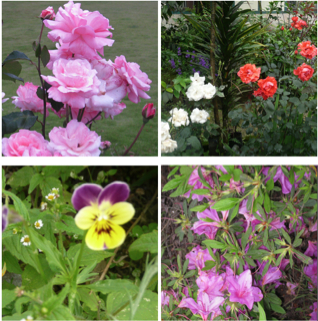 I’ve traveled a lot. Both in India, and around the world. Not just on ‘business’, but also for leisure. Like visiting Angkor Wat Cambodia.

Most of the time, there’s a pattern we follow. Make a list of things to do, sights to see, places to visit. Check them off the list, one by one. At the end, the trip is judged upon how many items were achieved, and how good or bad each one was, as an experience.

Well, our recent trip to the mountains of Sikkim and Darjeeling was different.

From the lush green plains of Siliguri, we drove down muddy, cool streets lined by tall trees into the forested remoteness of Lataguri in the Dooars. And from there, we motored up winding, oft-crumbling and pot-holed hill roads to reach the lofty heights of the mighty Himalayan range.

If Pelling is a magnificent mountain resort commanding a view of the mighty Mt.Kanchenjunga, and Gangtok is the worthy capital of a state more popularly known around the world as the ‘Switzerland of Asia’, the route from one to the other is a delight to the senses… and a crown worthier than its wearer. 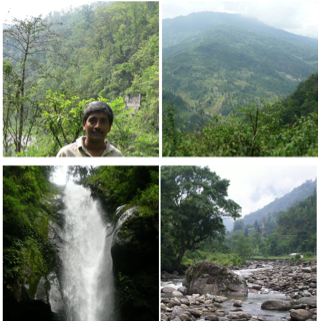 Sensational and spectacular scenery greets you everywhere you turn in Sikkim. It’s the only place I’ve been to where you could aimlessly point your camera in any direction, click, and end up with a snapshot that could be a picture postcard or pin-up calendar.

Distances (as the crow flies) mean little in this tiny border state, tucked away in the north-eastern extreme of India, wedged between Bhutan and Nepal, China and Bangladesh. We had been pleasantly meandering around all morning, only to have our driver point, late in the afternoon, to a mountain across the valley to say, “That’s Pelling, where we left this morning!”

What’s even more amazing is that we hardly realized it had been so long, engrossed as we were in feasting our eyes on some of the most remarkable natural beauty we’ve had the pleasure of enjoying, and relaxing in temperate weather that’s impossible to mimic in the South during summer, even with modern air-conditioning technology!

And as we rounded the bend, setting out on the road to Gangtok, that my daughter seated in the back asked the question:

“Where are we going next?”

In that magic instant before I replied, the real answer flashed into my head with startling clarity.

“It simply doesn’t matter. Because everywhere, it’s so lovely! The journey is the destination.” 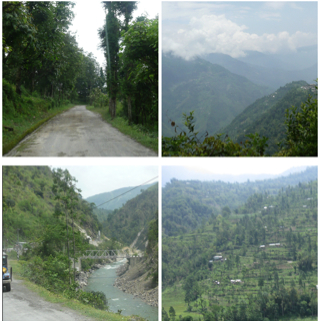 And as the car grinded up the steep slopes only to coast back down the next bumpy incline, around and around the mountain-sides in the long journey to our next stop, another line of thought entered my mind, competing for attention with the mist-shrouded peaks of distant Himalayan ranges and closer by, the roaring, frothy waters of the Rimbhi and Teesta rivers, the terraced farms growing rice and tea, the occasional evidence of frail humanity’s attempt to harness a small portion of the massive energy of nature.

We set ourselves ‘destinations’ and ‘stops’. Make ourselves lists to ‘check off’, and goals to ‘reach’. But all too often, in the mindless quest to get there, we miss enjoying many lovely things along the way.

Like health. And relationships. People and places, events and experiences, interactions and intimacies.

Small things. And sometimes even big ones.

A child’s performance in a dance program. A sunset. A bird singing on the tree outside your window. Suffering humanity caught in a cataclysm halfway across the world. A stranger’s smile on the bus. A playful dog’s antics. All become grist to our ‘Stuff to Ignore’ mill, as we focus on ‘getting where we must’.

Isn’t the journey really the destination?

How Can They Help You Become More Efficient?

Free online time management games are computer or Web based programs that simulate real life situations, putting the user/player in a situation where they solve problems and allocate resources in a way that teaches them better time management.

In most variations of free online time management games the user is provided with limited resources (points, or play money, or units of time) and given a challenging task to accomplish using them. By playing and winning the game, a player learns valuable skills that go a long way in managing time in real life.

There are usually two broad categories of games. One type is a life-simulation game. Another is a construction and management game. Each kind has special challenges and teaches powerful lessons in slightly different ways.

Life simulation games place you, the player, in a virtual environment that mimics a certain kind of employment or activity. For example, in a game called Simlife you are given the task of taking care of a pet. You must remember to feed it, provide for various needs, buy items necessary to take care of it, and more. The game teaches players to develop responsibility towards their dependents, and work towards a goal.

In another category of free online time management games called life simulation games, you get to live out your dreams for the future. In a game called Life Quest, your target is to plan your adult life, buying a home, seeking a well paid job, and raising a family. Just as in real life, you get to compete with your neighbors and colleagues, constantly challenged to choose areas where you’ll compete, applying your limited resources intelligently to further your goals.

One module of Life Quest pits you against your classmates in various competitions and tasks. This might mean getting a salary raise when your friends cannot, or acquiring some toy or trinket that they can’t afford, or even buying yourself a pet or companion.

There are also social simulation games where the emphasis is on interacting with other people. It is up to you, the player, to ensure that all characters in the free online time management games interact properly and co-operatively as the game progresses. Since social compliance is critically important to managing time and being more efficient, this teaches precious skills which will serve you well in handling your responsibilities.

As the name implies, these games are about building communities or projects. Depending on the game, a player is invited to build up an entity – a city, a building, or a government project.

The game teaches players important elements of planning, needs assessment, deployment of scarce resources and project management. By taking into consideration the various elements that go into planning a city, like food, security, housing, health and transportation, the gamer gains valuable insight into analyzing a situation and planning solutions to potential and actual problems.

In Sim City, the challenge is to run and operate a metropolitan city, including collecting taxes and conducting elections. Not all games are so elaborate, with some casual titles like Happyville being popular among youngsters.

Some kinds of free online time management games involve simulating day to day businesses. A user may be put in charge of a hotel or diner, and tasked with running the operations. In Diner Dash 5, Flo is a waitress who is called upon to manage a very busy restaurant. This game lets you practice the time management skills of rapid evaluation and decisive action taking – important requirements for running any kind of enterprise in real life.

Government simulation games mimic the realities of government policy making and require the user to think about issues like foreign policy, education programs and construction of buildings. While they can be considered escape from reality, good free online time management games can actually be excellent preparation for real life challenges.