(To You) What Is Success?

The year was 1994. The world was bewitched by two Indian beauties. Ms.Sushmita Sen was crowned Miss Universe. Ms.Aishwarya Rai, her runner-up in the Indian contest, won the Miss World title.

In the years since, both have had careers that followed different paths. And many people feel one was more successful than the other.

But reading Ms.Sen’s quote again 15 years later made me pause and think. About success. And about how individual it is, as a concept.

I asked my audience on Twitter, and the answers were interesting. Before sharing them, let me express mine.

“Success is the freedom to do what you want to.”

That’s what I believe. It implies you are in control – to do things. And it presumes those are things you want to do.

My Book Was a Success

For many years, I have wanted to write a book – an Amazon.com best-seller. For one reason or another, it kept getting put off… until I finally did it. 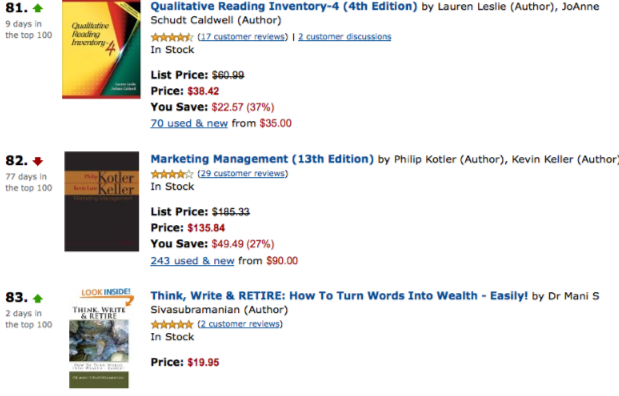 My book was a success.

At around the same time, Chris Brogan launched his book, “TRUST AGENTS“. It hit #1 in two or three categories on Amazon.com (even reaching the 30’s overall among all books) – and has since gone on to become a New York Times and WSJ best-seller.

If I had wanted what Chris has achieved, then even with everything else being the same, my book would NOT have been a success!

Is Bill Gates a Success?

He has worn many crowns – as richest man in the world, multi-billionaire entrepreneur and co-founder of Microsoft, and now super-philanthropist who gives away his money to improve health and alleviate poverty in the world.

So, is he a success?

Most people would say “Yes, of course”. Some would disagree, and give their own reasons. But only one person can say if Mr.Gates is a success – HIMSELF!

Because only he knows what he wants – and if he’s free to get it.

Not unless you WANT to be happy – in which case, you are a success WHEN you are happy!

But while many people assume ‘success’ is the same as ‘happiness’, I would argue that the two are distinct – though not mutually exclusive. You may pursue success at the cost of happiness – and will still be ‘successful’, even if not happy.

The Ultimate Secret of Success!

So, is there a ‘secret’ to success?

Yes. And it’s a simple, even obvious one. A secret that, once you know it, you can start using today, immediately, right this very minute – to become a ‘success’.

Best of all, it is completely within your control!

What is the secret? Just this. Change what you want.

No. Think back to when you were younger. Much younger. Did you want the same things you want today?

Very likely not. We grow. We evolve. We change. And as we do, what we want changes too. With it, your chance of success changes too – it gets better.

Think about the words spoken many years ago by a young lady who was at the top of the world – nay, the Universe!

In it, hidden, lies the secret of your success.

Here are some of the responses to my question on Twitter, “To YOU, what is the definition of ‘Success’?” Please add yours by leaving a comment below.

@ebizindia – Success to me is achieving a well-defined target. You are not successful if you made major progress but fell short of target.

@ShaunOReilly – Success = Living your own life, in your own way, getting better every day and making a real difference in the lives of others

@Ed – One angle: enough $ to never have to harm health chasing a buck…

@TerryDean – Success is when you get up everyday in love with your life. It’s not a destination as much as a journey.