India today is a very different country from the one I grew up in.

Youngsters in India have always been smart – but today, they also have many more opportunities to show off their intelligence, leverage it into tangible benefits, even monetize it in a way that wasn’t easy or intuitive a few decades ago.

But one thing still remains the same. Your average young Indian lacks confidence. Self-belief. The secure inner knowledge that what they possess will translate into success.

When I was a teenager, film stars, business leaders, best-selling authors and politicians were remote, famous figures one could only admire from afar, or at best, dream of gawking at from modestly close quarters. Limited access was indeed cultivated and nurtured as a symbol of fame and greatness.

Today, I count as personal friends, or have at least had the privilege of meeting in person, celebrities like Bollywood movie superstar Amitabh Bachchan, America’s foremost business consultant Jay Abraham, bestselling writer Seth Godin, and a British Member of Parliament, among many more of the ‘Rich and Famous’ club.

And I no longer view this with the same awe and disbelief as a typical Indian youngster would. I’ve learned that they too are people, like me and you, whom you can meet and get to know – if you want to and are persistent enough.

Much of this confidence stems from traveling to many parts of the world, meeting and interacting with well-known personalities in different areas (medicine, sports, movies, politics and more), and therefore realizing how friendly and down-to-earth many of these ‘super stars’ really are – when you get to know them.

And a lot of it also comes from setting some daring targets, and accomplishing some difficult goals. 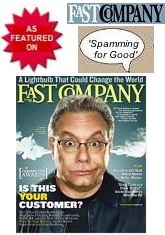 I was thrilled the first time my letter to INDIA TODAY magazine (with over 1 million readers) got published as part of the front page editorial – and even more so when my work with CHD was featured in a short write-up in FAST COMPANY.

I was excited about meeting and shaking hands with Jay Abraham at Detroit, having dinner at the House of Commons in London, and speaking with Frank McKinney on the telephone for half an hour.

Over time, success breeds confidence, and it just keeps growing in an upward spiral.

How much more impactful would it be if every Indian youngster had this same confidence – early on in life?

Even to this day, I feel uncomfortable (and embarrassed) when someone calls on the phone, or emails me, or even tweets a note, and displays stunned disbelief and extreme excitement at actually communicating with ME – because they didn’t expect to be “talking to a celebrity”!

While I have seen star-struck behavior in other countries too, it is usually reserved for film stars and sports heroes. I’ve never seen pioneer heart surgeons mobbed at conferences, or folks queueing up to shake hands with even very popular writers or marketers.

Why do Indian youngsters have a relatively poor self-image, despite being equal (if not, as I personally believe, better than other nationalities) in competence, skills and education?

I suspect it is competition. Overwhelming, crushing, unnerving competition – that requires an outstanding effort to stand out and shine over a crowd of hundreds of millions of peers.

Many try and give up. Early, small success may help them start off on that upward spiral that never stops growing. And helping give that tiny boost is something I’ve focused on doing lately.

I’m funding a young college student through his physical education course – after which he will find a job as instructor in a high school, setting him financially free to support his elderly mother and family.

I’m mentoring a young man who is one of the most enthusiastic people I’ve taught – and in just a few months, I notice a significant increase in his degree of confidence and a more sure and secure note to his emails.

I’m helping a talented young blogger try and reach for the stars – by seeing if we can drive enough RSS feed subscribers to her blog and get her enough votes to win the ‘Blogging Idol 2’ contest.

I’m doing this because, in my heart, I believe that this confidence boost will completely alter their perspective and create the platform for their overwhelming success in the future.

Confidence – especially confidence in one’s own self – is often hard to gain… but once gained, is much harder to shatter.

Giving our youth this essential morale builder should probably be the responsibility and duty of every successful achiever.

It will change the world they grow up in – and make it a brighter place for all of us. Go, change YOUR world. Today.

Dr.Mani is a Heart surgeon, Author and Social entrepreneur. He writes and sells ebooks to help raise money that sponsors life-saving operations for children born with heart defects.

Dr.Mani is Chairman of the Dr.Mani Children Heart Foundation. He's curious about things, and loves to read & travel. His current Interests lie in Genomics, A.I., Economics, Theoretical Physics and Nanotech.

For more about Dr.Mani, go here

Knife At A Gunfight - How To Build Your New Life In 5 Easy Steps More books by Dr.Mani - view catalog
NEW PROGRAM